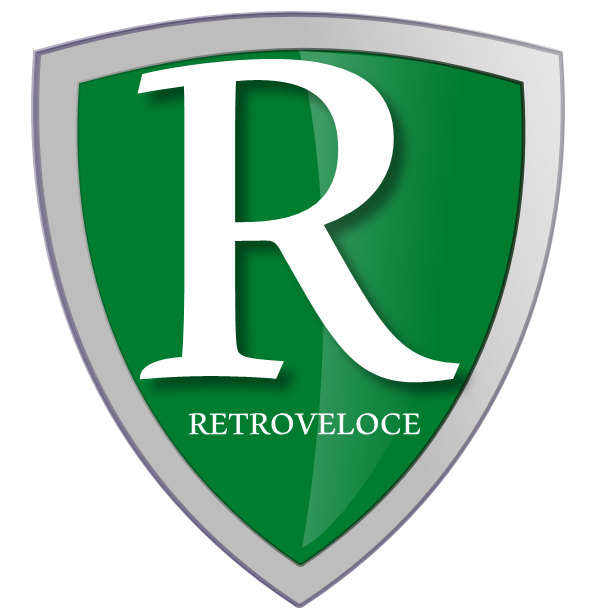 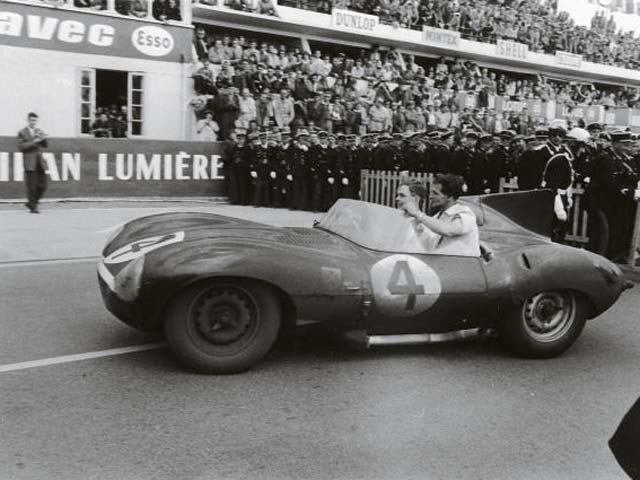 In 1956 (above), the Ecurie Ecosse entered D-type driven by Ron Flockhart and Ninian Sanderson stepped in to take the win when the Jaguar factory effort failed

Designed specificially to win the Le Mans 24-hour race, the slippery D-Type was produced by Jaguar Cars Ltd. between 1954 and 1957. Sharing the straight-6XK engine and many mechanical components with its C-Type predecesor its structure however was radically different. Innovative monocoque construction and aerodynamic efficiency integrated aviation technology in a sports racing car, some examples including a renowned vertical stabilizer. Engine displacement began at 3.4 litres, was enlarged to 3.8 L in 1957, and reduced to 3.0 L in 1958 when Le Mans rules limited engines for sports racing cars to that maximum. D-Types won Le Mans in 1955, 1956 and 1957. After Jaguar temporarily retired from racing as a factory team, the company offered the remaining unfinished D-Types as XKSS versions whose extra road-going equipment made them eligible for production sports car races in America. In 1957 25 of these cars were in various stages of completion when a factory fire destroyed nine of them.
Total production is thought to have included 18 factory team D-Types, 53 customer cars and 16 XKSS versions. A 1955 model was sold at a Sotheby’s auction in 2016 for $19,800,000. 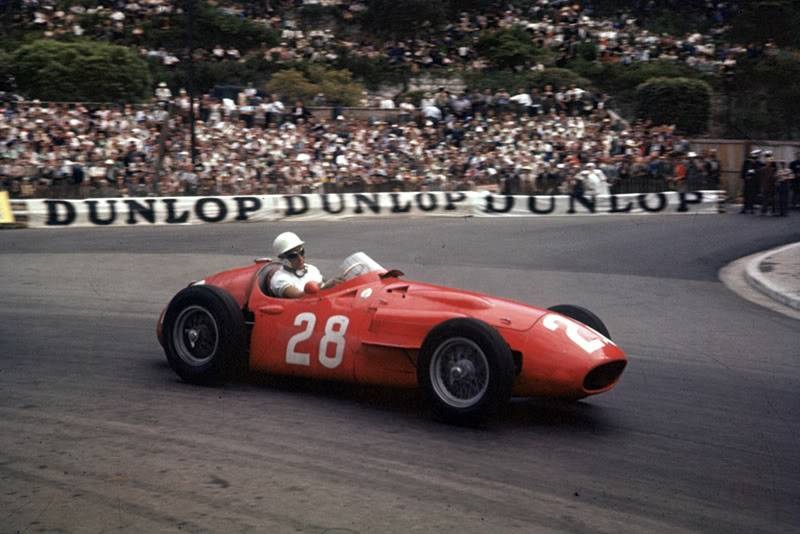 In 1956, Stirling Moss won the prestigeus Monaco Grand Prix for Maserati with the all time great the 250F. The car is one of the most successful Maseratis of all time.

The 250F first raced in the 1954 Argentine Grand Prix where Juan Manuel Fangio won the first of his two victories before he left for the new Mercedes-Benz team. Fangio won the 1954 Drivers’ World Championship, with points gained with both Maserati and Mercedes-Benz; Stirling Moss raced his own privately owned 250F for the full 1954 season.
In 1956 Stirling Moss won the Monaco and Italian Grands Prix, both in a works car. Stirling Moss later said that the 250F was the best front-engined F1 car he drove.
In 1956 three 250F T2 cars first appeared for the works drivers. Developed by Giulio Alfieri using lighter steel tubes they sported a slimmer, stiffer body and sometimes the new 315 bhp (235 kW) V12 engine, although it offered little or no real advantage over the older straight 6. It was later developed into the 3 litre V12 that won two races powering the Cooper T81 and T86 from 1966 to 1969, the final “Tipo 10” variant of the engine having three valves and two spark plugs per cylinder.
In 1957 Juan Manuel Fangio drove to four more championship victories, including his legendary final win at German Grand Prix at the Nürburgring (Aug. 4, 1957), where he overcame a 48-second deficit in 22 laps, passing the race leader, Mike Hawthorn, on the final lap to take the win. In doing so he broke the lap record at the Nürburgring, 10 times.
In total, the 250F competed in 46 Formula One championship races with 277 entries, leading to eight wins. Success was not limited to World Championship events with 250F drivers winning many non-championship races around the world. 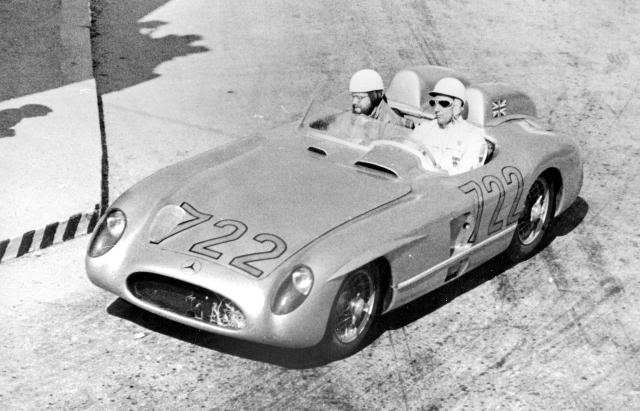 In 1955, one of the most outstanding events in motorsport history took place in Italy. Sir Stirling Moss with the help of co-driver Denis Jenkinson covered the Mille Miglia with an avvarage speed of close to 100 MPH!
“The greatest sports racing car ever built — really an unbelievable machine.” Stirling Moss

The Mercedes-Benz 300 SLR (W196S) was an iconic 2-seat sports racer that took sportscar racing by storm in 1955, winning that year’s World Sportscar Championship before a catastrophic crash and fire at Le Mans ended its domination prematurely.

Designated “SL-R” (for Sport Leicht-Rennen, eng: Sport Light-Racing, later condensed to “SLR”), the 3-liter thoroughbred was derived from the company’s Mercedes-Benz W196 Formula One racer. It shared most of its drivetrain and chassis, with the 196’s fuel-injected 2,496.87 cc straight 8 bored and stroked to 2,981.70 cc and boosted to 310 bhp (230 kW). Two of the nine 300 SLR rolling chassis produced were converted into 300 SLR/300 SL hybrids. Effectively road legal racers, they had coupé styling, gull-wing doors, and a footprint midway between the two models. When Mercedes canceled its racing program after the Le Mans disaster, the hybrid project was shelved. Company design chief Rudolf Uhlenhaut, architect of both the 300 SLR racer and the hybrids, appropriated one of the leftover mules as his personal driver. Capable of approaching 290 km/h (180 mph), the Uhlenhaut Coupé was far and away the fastest road car in the world in its day. 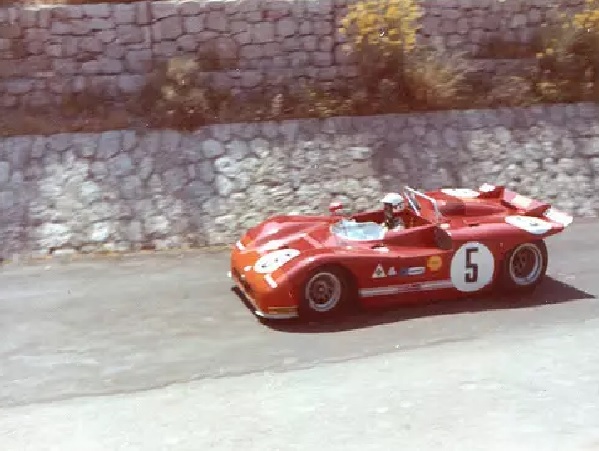 Just look at Nino Vaccarella in action at the 1971 Targa Florio in the Alfa Tipo 33 which he co-drove with Toine Hezemans to take the win in this famous roadrace! Andrea de Adamich and Gijs Van Lennep drove another Tipo 33 this year, and took 2nd place. The Tipo 33 went on to win Alfa Romeo two World Championship titles in 1975 and 1977.

Very few car manufacturers have the pedigree of Alfa Romeo. Already during the leadership of a certain Enzo Ferrari, who managed the Alfa Romeo works racing team under the name of Scuderia Ferrari before setting up his own operation, the Milanese cars from Alfa Romeo were a hard nut to crack for the competitors on the racetracks in the early years of racing. Alfa Romeo were World Champions in 1925, and scored wins in Mille Miglia all years but one between in 1928 and 1938 with its fantastic models 6C and 8C! Alfas also clinched four straight wins at Le Mans between 1931 and 1934.

This website uses cookies to improve your experience while you navigate through the website. Out of these, the cookies that are categorized as necessary are stored on your browser as they are essential for the working of basic functionalities of the website. We also use third-party cookies that help us analyze and understand how you use this website. These cookies will be stored in your browser only with your consent. You also have the option to opt-out of these cookies. But opting out of some of these cookies may affect your browsing experience.
Necessary Always Enabled
Necessary cookies are absolutely essential for the website to function properly. This category only includes cookies that ensures basic functionalities and security features of the website. These cookies do not store any personal information.
Non-necessary
Any cookies that may not be particularly necessary for the website to function and is used specifically to collect user personal data via analytics, ads, other embedded contents are termed as non-necessary cookies. It is mandatory to procure user consent prior to running these cookies on your website.
SAVE & ACCEPT